So this weekend I went to another edition of the Fórum Fantástico, one of Portugal’s most important events on SciFi and Fantasy. I’m not sure exactly how to talk about this in a way that is interesting to many around the world, all I can say is that most writers that I know and know of made sure they went to promotional events and they are an integral part of becoming a successful writer. So let me speak a little bit about that.

I was never a particular fan of events. I don’t really like crowds or crowded places and get bored in many of the so-called fun activities. I started going to a few local ones not because I was having fun or to show myself to the market but for a very simple reason: I was learning stuff. I was meeting good writers, exchanging ideas and listening to many speak about problems that I also was having or I never thought about and yet I should. Also, many nowadays famous writers seemed to have begun by going to local and not-so-local events before becoming famous. And I was starting to understand why Tom Clancy would bother to go to autograph sessions where only five or six people were coming, for instance – he was starting and six people is better than none.

So I don’t go to many events, but I choose a few I try never to miss. First among these is Fórum Fantástico. This year I was invited to animate a couple of workshops with my friend and publisher Pedro Cipriano. We did ‘How to Kill Your Characters’ once more (you can read about it here), and another one we called: ‘From Idea to Structure’ (about things you find here). At one of them, we had only one single student. A few years ago that would have broken my heart, but these days it didn’t surprise me nor discourage me – I had a blast speaking with this Brazilian national coming from France that just read about the workshop on a magazine and decided to show up.

I was also able to meet the talented writer Chris Wooding, and his smart editor Gillian Redfearn, and attended their workshop on Character Development that made me open my eyes to a couple of new things. Chris spoke about his use of ‘Theme&Thesis’ Character Development scheme he picked up from Dara Marks and which I became very interested in. 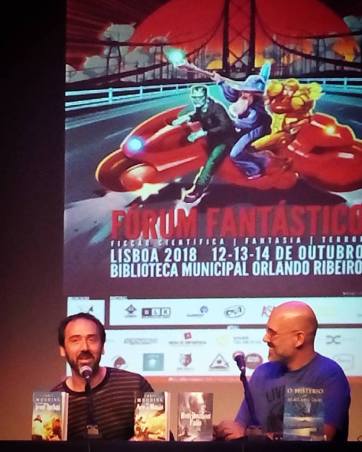 Another thing I really enjoyed: I was part of the jury of a national contest for Fantasy novels. I had to go through 27 novels by writers from all over the country. It seems daunting, doesn’t it? It was. I sighed in relief when we were done. But also: I was really surprised by the quality of the writing out there, appearing from nowhere. I believe we will have a new generation of very talented Fantasy writers coming from Portugal in the next few years and that’s incredibly exciting. At the FF18, we presented the award to the winner: a young writer called Pedro Lucas Martins no-one really had ever heard of. He’s really good. Let’s hope he keeps writing!

FF is not the biggest event of the kind in Portugal but it’s the one the ‘people-in-the-know’ like to go. You must have similar events in your part of the world and my advice is: go to them. Mingle. Get to know people. Learn some stuff. It will seem little at first, but then you’ll find it will serve you more and more. Until next year Fórum Fantástico. I’ll be there in a year.