This post is the continuation of the previous one. Those of you who haven’t read the previous post, please start there. If you keep reading this post, let me warn you it contains SPOILERS to the movie EXCALIBUR, even though I don’t believe these will ruin it for you. You must watch it! Seriously!

So, as I was saying in the previous post, a few minutes into the movie young Arthur becomes King Arthur. He hasn’t yet united England, but his loyal subjects around him will help him do that. One day, as he travels to war, his army is stopped at a narrow bridge by a shiny knight from a distant land, who challenges and defeats knight after knight. Frustrated and irritated, Arthur finally decides to confront him himself. The knight presents himself as being Lancelot du Lac (Lancelot of the Lake… coincidence? I think not);  he’s a knight from a foreign land on a quest to find a true king he may pledge allegiance to. Arthur fights him and soon he is in trouble. This perfect knight is better than him. Everything Arthur tries to win the fight is perfectly countered by Lancelot, until, at the end, knowing he will lose, Arthur calls on the power of Excalibur and strikes a blow. The blow defeats Lancelot, but it also breaks Excalibur. «You’ve broken what could not be broken!» Despairs Merlin. «Hope is broken!» Casting his broken sword on the lake, Arthur feels the guilt: Excalibur should have been used for serving the people, for uniting the land, not for the pride of one single man. He is unworthy. But as he understands this he becomes worthy again – the Lady of the Lake shows up and gives him a renewed Excalibur.

Arthur takes it as Lancelot wakes up  – he is happy, he finally found a king who could beat him and, so, a king he could serve. This is incredible plotting technique as intentions and motivations and action twist and turn around themselves. Lancelot is so perfect, a figure of myth himself, a figure of the Lake, that only supernatural power can overcome him. It is Excalibur, not Arthur, who defeats him. But in using Excalibur for himself, Arthur is committing the sin his own father had committed – and so Excalibur is lost. So Arthur must recognize his own fault and his mistake. However, only by that mistake does he win Lancelot’s loyalty. When he gets Excalibur back, Arthur becomes the king Lancelot could follow. If he hadn’t committed that sin, he would never have won Lancelot. Clever, no? One single event has opposite effect on two storylines: to win Lancelot, Arthur must lose Excalibur. And yet he needs both.

That sin and that win over Lancelot will come back to haunt Arthur in the opposite directions. He will lose both Excalibur and Lancelot before he is able to get both back. And it happens because he learned his lesson well: because he puts his crown above his manhood. But I’m jumping ahead.

As the war ends and England is united, the Age of Chaos also ends and the Age of Camelot begins. A Round Table is put under the perfect castle of Camelot. Armors become shiny as only Lancelot’s was before and the knights become the myth. With this, Arthur decides to marry Guenevere and asks Lancelot to escort her from her father’s house.

As they travel, Guenevere asks Lancelot if he loves any woman. As he is a perfect knight, Lancelot replies that he serves his king and, as such, he can only love one woman forever: his queen. This is very perverse and is masterful plotting: it’s Lancelot’s perfection itself, his virtue, that will bring everything tumbling down. To avoid the traps of this love, Lancelot starts travelling, becoming absent. This is the pretest evil Morgana can use to arouse suspicion on the minds of the court. On one of his travels, Lancelot comes across Perceval, who becomes his squire. Perceval will be the symbol of the common man and a very important character as the History progresses. At the same time, Lancelot is betrayed by his dreams of lust/love for the queen. Awaking from one of this dreams he accidently stabs himself with his own sword (a phallic symbol of desire turning on the man). Meanwhile, Morgana is able to convince Sir Gawain of Lancelot’s betrayal, encouraging the knight to accuse the champion and the queen. Arthur must make a choice: either he defends Guenevere as his husband and his man, or he remains her king and her judge. Of course, he won’t commit the same sin as his father, he won’t fall into the temptation of being a man first and a king later. He decides to remain the king and leave Lancelot to defend the queen. The wheels keep turning. At the day of the trial, Lancelot is not there to fight Gawain and defend the queen as he is still fighting the wound opened by his desire. Arthur then asks if no-one would defend the queen. The only one willing is the small, humble, common, brave Perceval. Arthur hurries to make him a knight, even though the man has no chance against Gawain.  At the last moment, Lancelot shows up. He defeats Gawain because in truth, he and the queen have not betrayed Arthur. Still, his wound opens up and he almost dies, because in truth Lancelot and Guenevere are in love. Lancelot is the man Arthur cannot be. He is the perfect man instead of the perfect king. That night, Guenevere goes to him and he cannot reject her. That is the night of doom. In one night, Lancelot and Guenevere betray Arthur, and Arthur sticks Excalibur on the ground between them. When he does this, Excalibur injures the Dragon and Merlin dies. Arthur is then deceived by Morgana and makes love to her, making her pregnant. He also falls into the trap of lust and sin. In one night, everything that was built is destroyed.

What is interesting is that it all seems inevitable: all characters seem to be doing what is destined to be, what they were meant to do. This inevitability of decisions that make and break characters and stories is a very difficult thing to achieve in such a powerful way. In EXCALIBUR, it’s not just one character that is pushed into doing what he or she does: it’s four, five characters doing what seems inevitable to them. This is very good writing.

After this night of doom we enter the Age of Christ. Excalibur, Guenevere, Lancelot, Morgana and Merlin disappear. Showing up before the cross of Christ, Arthur is struck by lightning in his heart and becomes severely ill. There’s only one thing that can save him, and that’s the Holy Grail, the blood of Christ. As the knights of the Round Table go on a quest to find the Grail, they see the land and the people also very ill – as in the plagued Middle Ages. Now the movie turns to the story of Perceval and his quest. 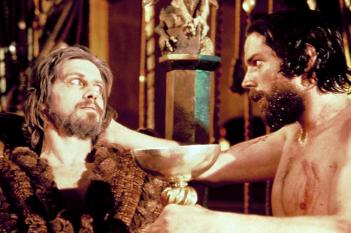 He travels far and hard, watching his fellow knights fall one by one. When he is caught by his enemies and hanged and he is about to die, he finally sees the Grail, then a voice is heard: «What is the secret of the Grail? Who does it serve?» Perceval is saved at the last minute, losing the Grail. But he must try again. On one of his travels, he finds Lancelot, gone mad, preaching the apocalypse with a cross on his neck. As Perceval tries to approach him, Lancelot pushes him into a river. Perceval is pulled down by his armor. He is going to drown. He takes off his armor piece by piece. He becomes a common man again, fragile and alone, about to die, resembling Christ himself. And then he sees the Grail again, and again the voice asks: «What is the secret of the Grail? Who does it serve?» But now Perceval knows the answer: «You and the land are one.» «Who am I?» «You are Arthur my king.» There: that’s everything! That’s what the movie has been telling us since the beginning: the land, the people and the king are one. That’s the secret of power. All connected. Perfect!

As Perceval answers the questions, he is able to get the Grail and gives it to Arthur, who recovers. But the king and the land and the people still have a mortal enemy: Morgana, the bearer of revenge, and Mordred, her son, born of incest with Arthur. They fight Camelot and all it represents. Arthur gathers his knights to battle. He finds Guenevere at a convent (where else in an Age of Christ?), where she expiates her sins while guarding the Sword of Power: Excalibur. He forgives her, of course. With renewed strength, Arthur goes to battle wilding Excalibur and is helped by two other allies: the ghost of Merlin and the returned Lancelot that saves his life when all seems lost. The perfect knight will fall, bleeding out from his old wound. Finally, Arthur faces Mordred alone: they kill each other. Good and Evil cancelling one another. 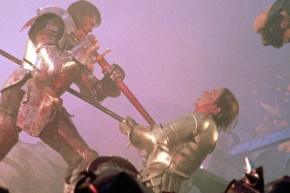 In the end, only Perceval, the common man, survives. When a dying Arthur asks him to cast Excalibur into a lake, Perceval hesitates. Excalibur is the dream, it’s Camelot, it’s Paradise. Without the perfect king, there will not be a perfect kingdom. Perceval tries to deceive Arthur, but the king tells him: «One day, a king will come, and the sword will rise again from the waters.» The dream is not dead. The common man will always try to go back to Paradise. One day he will be able to. Excalibur is cast into the lake and Arthur dies, leaving in a funeral barge.

As I said earlier, this is one of the best scripts I have ever seen. The writing is superb. Most of all, the plot is almost perfect. No other depiction of Arthur’s story I know is so sophisticated, coherent, profound, intelligent. Any screenwriter, or every fantasy writer, or any writer, should see this movie and analyze its plot. See how the techniques are used, how it is all connected. How the characters are multilayered and each layer has an impact in the story. And at the same time they are all coherent and symbolic. It has an anthropological perspective, showing us the struggle of Mankind itself and the difficulties of being human as a whole. And it has multiple amazing plot-points with scenes that propel the story in several directions, equally essential, which is something that is so difficult to do it’s incredible it happens so many times in one movie. 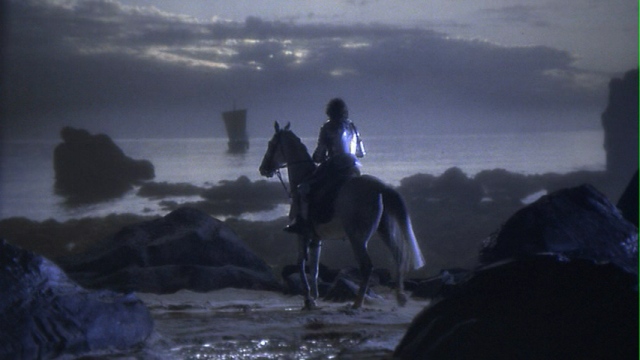 I once wrote a scene in THE ALEX 9 SAGA where two friends are chasing their enemies through a tunnel and a wooden door shuts between them. On one side the first character is threatened by flames and smoke; on the other side the other character is in the dark with a silent assassin. The first character finally is able to turn the fire to the wooden door and make an escape. As he does this, the flames light up the silent assassin, allowing for the second character to defend himself. I was proud of this scene, even though many may not have noticed its sophistication: there was one single difficult solution for two different problems – a small storyline crossed another small storyline. This is difficult to do because both storylines must cross at exactly the right moment, whatever may be happening on one side or the other. And it must seem easy and coherent. I was inspired to do this little thing by EXCALIBUR. The movie does it over and over again in a much larger scale. So go watch it. Watch it with different eyes. I promise you will learn from it.