When I was a boy, I watched John Boorman’s EXCALIBUR for the first time and was amazed.  I’ve watched it many times after that and I am still amazed. It’s not just a ‘sword fighting’ movie as many would see it, it is a lesson in writing. A lesson in plotting. I have learnt a lot from it and after being urged by a comment on Facebook I finally decided to give you a glimpse of what I see in this brilliant piece of work, which is still today one of my favorite movies. Actually, these will be two long posts – read them at your will.

John Boorman is a solid director that gave us movies like DELIVERANCE or ZARDOZ, et al., but for me, 1981’s EXCALIBUR is by far his best work. It features very young actors that would become legends, as Liam Neeson, Gabriel Byrne or Helen Mirren as Morgana LeFey; and also a brilliant Nicol Williamson as Merlin. The costumes are not adequate to the time it portraits (the plated armors are more indicative of the 14th century than of the 8th or 7th, but this is mostly irrelevant) and the light and photography and effects are not as sophisticated as we’d see today. However the writing remains superb and is for me, by a long shot, the best rendition of King Arthur’s story I ever watched or read. I never read Thomas Malory’s LE MORTE D’ARTHUR on which the film is based, so I don’t know how much of the writing is in fact Malory’s and how much is Boorman and Pallenberg’s screewriting – however it’s so full of intelligent use of extremely sophisticated and difficult techniques it’s mind blowing for a writer. These include: important scenes and events that move the plot in several different directions, perfect harmony between plot and symbolism, profound insights into Human Nature and Human History, characters that always seem to do the inevitable and other plotting techniques used so easily that audiences don’t even know they are there – but kids, please don’t try this at home, this kind of writing is like Paganini to violinists or Rachmaninoff to pianists, it’s just virtuoso plotting, it’s the equivalent to plotting as Aaron Sorkin’s writing is to dialogue. And plotting, believe me, is much more difficult to master than dialogue.

So I’m going to write this post in a different way, today. I haven’t watched EXCALIBUR in years, but I’m going to try to describe the main plot point by point, at least the main points I want to talk about. This will mean SPOILERS. Even though I know from experience that knowing what’s going to happen won’t ruin this movie and King Arthur’s tale is one of the best known stories of all, I still have to warn you. The movie goes through three different mythical/anthropological ages as it tries to describe the History of England and even the History of Mankind. First, the Age of Chaos; then the Age of Camelot; then the Age of Christ. With each age, rules, thinking and feel very much change even as the story remains one. This is remarkable by itself. Let me tell you how it plays out.

It all starts with Uther Pendragon, a warlord of early feudal England. The land is divided and lords fight among each other to find a king that’s worthy of the throne. Uther has an ally, the wizard Merlin. Merlin draws his powers from The Dragon, which is Nature itself, it seems. Merlin would describe it as: «It is everything! It is everywhere! It is all around us!» Merlin takes Uther to a lake where the Lady of the Lake gives him Excalibur, the Sword of Power, made from the scales of the Dragon itself. Showing the sword to the other lords, Uther achieves peace and allegiance. However, he’s not a complete man and so he falls in love/lust with his rival’s wife. War breaks out again. In the mist of battle, Uther asks Merlin to use the Dragon’s power to give him a night with the woman. Merlin, seeing Uther is not the man to unite the land, accepts but demands a mystery favor in return. Uther gets his night of love with Igrayne.

The image of a full armored man making love to an eluded naked woman was very erotic in the 80’s, and it is the perfect image to show us the Age of Chaos, an age where myths, mystical magical powers, passions, violence and war were the way of the land. Uther crushes his rival Cornwall and marries the widow Igrayne, who gives birth to Arthur. When Arthur is born, Merlin returns and demands the baby as payment for his service. See how the plot swirls around? Merlin gives his power to Uther, lends him the power of the Dragon, but as Uther is an imperfect man, a man of his age, it is exactly because he wins everything he wants that he will lose in the end. A perfect king must know that the use of power is not about him. Is not about being powerful, it’s about more than that. Still, Arthur is the union of the Pendragons with the blood of their adversaries, which makes him the embodiment of the Union. He has a half-sister, daughter of Igrayne and Cornwall: Morgana LeFey, which will be the remnant of the Age of Chaos and embodies the revenge of Uther’s rival – so Uther’s human faults, the ‘mistake’ he makes in the beginning of the movie, will be the downfall of the Pendragons in the end.  A perfect circle.

Mad with Igrayne’s cries for the loss of baby Arthur, Uther charges into the woods after Merlin. But he is betrayed by other knights that loathe him and knowing that he is lost, Uther does the unthinkable: as he is dying he decides to destroy Excalibur against a stone saying: «No-one will have Excalibur but me.» It’s the ultimate selfish act: to destroy the Sword of Power if he cannot have it. Excalibur, however, instead of being destroyed, gets stuck in the stone and becomes stuff of legend. For the people, the one who takes is out of the stone is destined to be king. But that’s not Uther’s curse; he said: «No-one but me.» Which means: only his own blood can take the Sword. This is a fantastic technique difficult to use: have part of the characters believe in something, but give it a small twist, so the plot-point has two different effects on the plot: only Arthur will be able to draw the Sword because he is Uther’s blood. But every knight is fighting to prove himself worthy and become king because the myth is: he who has that sword will be king. But Arthur is already king, because he was born from one. Maybe this is the source of that tradition: that the crown passes from king to his son? 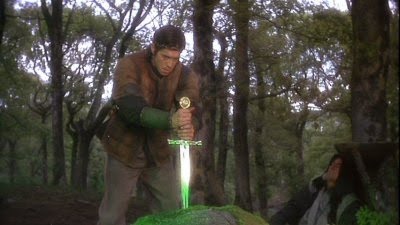 Anyway, Arthur has grown into a young man, raised by Lord Ector incognito and becoming the squire to his would-be brother Kay. Kay is to fight in a tournament to earn the right to pull Excalibur from the stone. As Kay’s sword is robbed, Arthur decides to take Excalibur from the stone and does it easily. He becomes the king, but several of the lords will not accept a mere boy as king so they rebel against him. Merlin shows up to help Arthur and is impressed by the boy’s leadership skills. As Arthur goes to help his main ally besieged by Lord Uryens, the movie gets to one of its best scenes. I’ve shown this scene at some Leadership Seminars and it always moves me. It is, for me, the portrait of true leadership. This is what happens:

At the top of the battle, Arthur is able to jump on his lead-enemy Lord Uryens and overcome him. He puts the blade of Excalibur against Uryens’ throat and asks his surrender. Everyone stops fighting and looks at that confrontation. Everything is in the balance. Surrender, demands Arthur. But Uryens replies: «Me, a knight?! Becoming a subject to a simple squire?? Never!!» And Uryens’ men echo: «Never!!» Arthur thinks about it. He looks around. And he decides Uryens is right. Uryens is just fighting for what is just. For what the people believes in. For knighthood and honor. He says: «You’re right. I’m not yet a knight. You, Uryens, take Excalibur and make me a knight.» He gives Excalibur to Uryens and kneels before him. Uryens is baffled. Someone shouts «Kill him Uryens! Take the sword!» But after a moment of confusion, Uryens puts Excalibur on the shoulder of Arthur and makes him a knight. He then kneels and surrenders, swearing allegiance. He becomes a loyal subject. Arthur is a true king.

What a brilliant scene!! I still get goose-bumps from it. A king is not the one who wields the power, he’s the one who is true in his heart. The one who serves his people, not himself. Arthur understands what Uther never did. And so he becomes what his father never could. This scene not only is brilliant in the writing but completely serves the story. We not only recognize a leader in Arthur here, but we find that the reason he becomes a leader is the whole point of the whole story. This is plotting, my friends!!

All this will be confirmed again in another beautiful scene: the time Arthur meets Lancelot. I’ll describe it in the next post.