So Merry Christmas everyone, or Hanukkah or any other way you believe in celebrating the Winter Solstice. This time of the year has been special for thousands of years, marking the shortest day of the calendar and the beginning of hope of nicer times to come. The great Stonehenge seems to have been built around this particular date and every Northern Hemisphere religion seems to attach some significance to it. Even people that believe the laws of Nature are somewhat random would agree that this date is objectively interesting.

We all strive for a purpose, to learn and understand the Meaning of Life. It’s difficult, in a Universe so large and mysterious, to deal with so much that is unknown. Is there life in other planets? Will the Universe ever end? Will it end in cold or heat? Can we travel faster than light? What kind of forces are at work all around us? Is there life after death? We know nothing or close to nothing. And for some reason, that lack of knowledge is very scary to us. We feel without control. Fearful of what we don’t know. Even if there’s reason to believe that, despite all the dangers, most of us are safer now in our daily lives than it was ever possible in the History of the World. When we watch other animals in the wild, a lion, a zebra, a kangaroo, we can see they are always watchful, always alert. They live in the fear of the dangers of the jungle or the savanna. If they are not careful, a predator, a natural disaster or a surprising snake or scorpion can put their lives in danger. Maybe it is this ancient habit of dealing with the scary unpredictabilities of life that makes us still today, when we live in our safe quiet civilized homes, to be afraid of what we don’t know.

And so we cope. I think it was Freud that said that mental health is the ‘ability to deal with ambiguity’. If most in our lives, in our Universe, is uncertain, it takes a special kind of soul to be able to relax and accept that being alive is being uncertain. Others, less sure of themselves, will create all kinds of subterfuges to deal with the unknown. Some of these subterfuges are harmless and even clever. In my view, that is the case of Christmas and other Winter Solstice celebrations. Maybe we’re not particularly sure why the Universe moves in certain ways and why a certain regular date, in the middle of Winter, is always the shortest day in the year, but we can accept that it is so and celebrate it. Whatever excuse we use for it, it’s a time in the year we can be more caring, more nurturing, more empathetic, more loving.

Others, though, will cope with uncertainty in less healthy and responsible ways. At the center of these are paranoiacs. For paranoiacs, the uncertain is so scary that they are willing to accept any desperate and absurd reason for the ways of the world. Paranoiacs, the studies say, consider themselves the only ones that are ‘in the know’, when in fact they are remarkably easy to fool. Once they believe in their theory nothing will move them, as they cling desperately and blindly to the ‘one thing’ that seems certain to them. Especially in a world that appears to be increasingly uncertain.

That’s why, in times of crisis and uncertainty, conspiracy theories and political opportunists thrive. Wrestling to believe in something, people unable to reasonably deal with the anxiety of the unknown will buy the most absurd of certainties. That the Earth is flat, that Man didn’t land on the Moon, that immigrants destroy civilization, that America is Evil, that the Western civilization is perverse, that terrorists will win in the end, that journalists are all liars.

Even if we can accept that one or several of the above premises could be correct, none of them is certain or even likely. And they present an added problem: they distract from emerging dangers that, even if they are uncertain, are far more likely, as Climate Change or the danger of another large war. There are far more evidences of Climate Change that of any of the premises I’ve mentioned, and very rarely in the History of Mankind there was ever the kind of massive arms build-up we are seeing today without resulting in a devastating war. 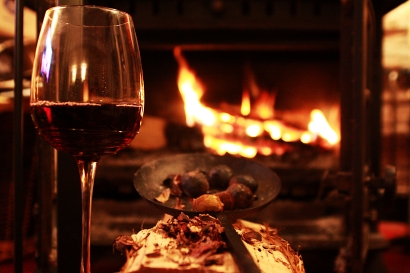 This said, the likely antidote to all these problems, from ambiguity to paranoia, from Climate Change to the danger of war, is the kind of spirit and amity we cultivate during what some of us call Christmas. So enjoy, be kind, nurture, love, read books, talk to your friends and family, play in the snow and sing watching chestnuts roasting on an open fire. Rest. Hope. There’s a lot to do next year. Merry Christmas and a Happy New Year.

One thought on “Merry Christmas: on Winter Solstice, Flat Earth and Ambiguity”