I haven’t binge-watched a TV series in a long time, but this weekend I devoured the 9-episode second season of MINDHUNTER, a brilliant Netflix series on the development of the Behavioral Science Unit of the FBI – a unit focused on the psychology of serial killers. In the late 70’s and early 80’s, the BSU started by interviewing incarcerated serial killers to understand what moved them. That led to a quantum leap in serial killer understanding and apprehension. The story is absolutely fascinating and the series is top-notch, with the notable participation of the amazing David Fincher. Some of the scenes on the interviews are incredible, including the riveting performances of Cameron Britton as Edmund Kemper, the ‘Co-Ed Killer’, and Damon Herriman as Charles Manson. 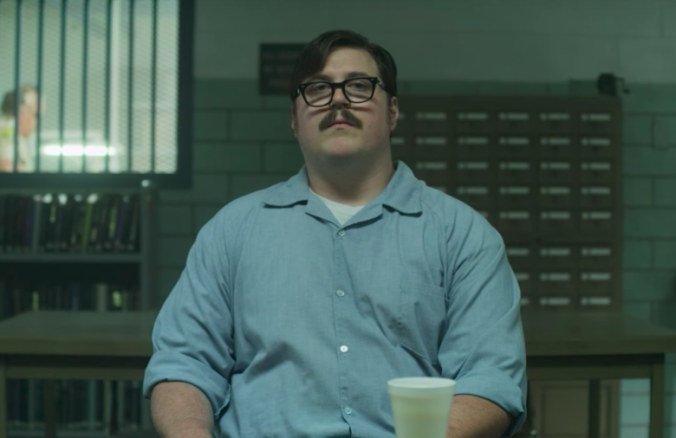 This last particular interview, on the 5th episode of the season, made me think about the root of Evil, arguably the theme of the whole series. The argument apparently made by Manson’s character, that we are all prisoners of an oppressive system and that true freedom comes from releasing the chains we feed in our minds, seems a common thread in the speeches of violent criminals, be it Adolf Hitler’s pseudo-Nietzchian arguments or the Unabomber letters portrayed in another interesting TV series: MANHUNT: UNABOMBER, with Sam Worthington and Paul Bethany. I’ve talked about this illusion of freedom here. As I said, rebellion is just another immature bind – rebels are another manifestation of our reaction to the Names of the Fathers, the prison of ancestry, the idea of a ‘civilized society’. So much so that society itself already plans for it, expects it, molds it and controls it. We can see it in the way drugs are manipulated, in the opioid epidemic, in the institutionalization of rebellion in Easter Parties and teenage alcoholism, in the systems of punishment in schools and other organizations, etc.

Actually, if we think that we could simply do without the Superego parts of our mind, those parts that regulate social behavior, I would argue instead that that would lead us to a kind of jungle scenario, a non-state country, a Somalia, a type of zombie post-apocalyptic world we can find in the likes of THE WALKING DEAD. The Superego makes us able to live in community. More so in a super-tribe environment, as we live in groups of people that actually don’t know each other at all. If you go to a large city as New York or London, and you walk through 5th Avenue or Oxford Street, you will probably walk by thousands of people that, by and large, are complete unknowns to you but don’t pose a particular danger. By and large, you are much safer in those environments than in the African savannah where Humanity started its journey and where a lot fewer individuals of different species actually cross your path. That is the beauty of Humanity’s social behavior. Our ability to live with each other which allowed us to climb the ladder of Evolution and overcome Neanderthals. You can argue, of course, that we have an excess of Superego in our lives, that it inspires a judgmental and oppressive atmosphere where the liberty needed for a meaningful and happy life becomes difficult. I would agree with that. Tolerance, compassion, and balance are underrated qualities. But still, our Superego is a vital part of our standards of living and of a free society.

With a functioning Superego come somewhat balanced feelings and emotions of Guilt and Shame. We feel Guilt and Shame as we perceive a given behavior to be Wrong. To be contrary to a Good Life. In particular, a Good social life. Those feelings (along with Disgust and Repulsion, for instance) are some of the alarm bells that tell us that we are Wrong, or that somebody else is Wrong. What we seem to systematically find in psychopaths and sociopaths and, in fact, in serial killers, is a dysfunction in these feelings. They seem to normalize abhorrent behavior or, at least, they seem to be attracted to abhorrent behavior – to be ignorant or oblivious to a sense of Wrong or to be attracted to this Wrong. They don’t feel Guilt and Shame and Disgust and Repulsion the same way we do.

What is curious though, I believe, and scary is that we are not safe from those kinds of imbalances. We can, and sometimes we do, tolerate, normalize and assimilate abhorrent behavior. That’s why we send soldiers to war, to kill the enemy, and we don’t call it murder – in spite of the similar degree of violence of their actions. No wonder many can’t take it lightly.

I also read last week, an article on the American Border Guards of the detention centers for kids. The article spoke of a guard who was a good father to his toddler and who was disturbed by his children’s cries, but who at work would ignore the desperate cries of the infants in his care. The conclusion seemed obvious: if he cared, and feeling incapable of improving the situation, he would become unable to do his job. Being able to stop caring, being able to ignore the cries of the immigrant children, became a working ability that made him competent in his job. An ability that enabled him, ironically enough, to keep a job to feed his children. He forced himself, as I guess many others would, to compartmentalize his Guilt and his Shame to make his own behavior normal and tolerable.

Actually, we all have done something of the kind with the likes of Trump himself. He is now able to insult the disabled, attack the press, offend foreign dignitaries, praise dictators and murderers, purge immigrants, ignore the legislators and the judiciary, lie and deceive with such impunity and a sense of normalcy that it seems that it is our feelings of Shame, Disgust and Repulsion that are out of place.  The bar of what’s normal is systematically, constantly and relentlessly lowered more and more.

We should be careful, though. This is not an original phenomenon. It has happened before. This is the phenomenon that Hannah Arendt called The Banality of Evil, and it is one of the main pillars of totalitarianism.  It happened in Nazi Germany and in Soviet Russia and in Maoist China. For the people to be able to accept and integrate extreme violence and Evil ideas as the ones leading to the Holocaust, the bar of normalcy was systematically and relentlessly lowered in those societies over a period of time. It became normal for the inferior to be outcasted, and for the communists to be persecuted, and then for the disabled to disappear, and then for the Jews to be blamed and downgraded, and then for the deportations to occur. And it all seemed more or less normal as it was happening.

For a long time I didn’t really believe in Good and Evil. For me there were Good deeds and Evil deeds, but there wasn’t something completely Evil, for instance, or completely Good. I changed my mind about this sometime ago. Even though I still believe that our Moral Compass is what makes an action Evil or Good, I now believe that this compass can actually be completely corrupt. What makes a difference is our ability to respect our Moral Compass, to Think and to Think Morally even through difficult times, or especially in these critical times. We cannot tolerate the intolerable. Or all is lost. Our compass will just stop working. And then the worst happens.

That’s all I have to say today. Until next time.