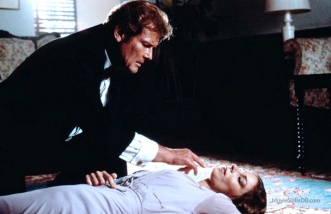 I used to be a very annoying kid. I had a fascination for movies since a young age and I would spend hours chasing people down to be able to describe to them thoroughly the latest movie I’d watched. Every single scene. And until my 20’s I was capable of remembering every single movie I had seen. After that, the movies became too many or my memory too evasive and I started making mistakes about this or that picture, this or that actor, this or that name. I still remember very well the first PG-13 movie I saw in a theatre. It was 1977’s Mike Newell’s mediocre THE MAN IN THE IRON MASK. My parents took me one evening, while my younger brother and sister remained at home. I felt like the luckiest kid in the world. This was at Cine Santa Maria, in Funchal, Madeira, Portugal. I don’t know if it still exists. And I remember the first PG-13 movie I went with my brother: it was 1980’s THE SEA WOLVES, with Gregory Peck, Roger Moore, and David Niven, and we saw it at Cine Casino, in the same city, where we lived. And I remember the first James Bond movie I ever saw: it was THUNDERBALL and I saw it with my father and brother in Lisbon in ’82 or ’83.  And the first time I saw THE SOUND OF MUSIC with my mother and siblings at a theater in Lisbon. And 2001 – A SPACE ODYSSEY in Lisbon which I saw with my mother when I was 13. I hated it then. Love it now. See how annoying I can become? Movies blow me away. I love them. I can’t stop talking about them.

For a long long time, I never dared to think I could be involved in making them. I’m a Portuguese writer living in a country with a poor tradition in movies – and as I grew up and through most of my adulthood, the movies made in Portugal were absolutely not movies I’d want to see. Nobody made commercial movies in this country for 50 years. Now there are a few attempts at it, but poor and far between. No-one makes movies in Portugal without a subsidy from the Government. And when it comes, the producers get immediately most of the money they will ever get from it. So they don’t have any incentive to please the public – they just have to please the 5-person jury that decides who is getting the money. It’s a horrible corrupt system and it supports horrid uninspiring amateurish movies they make every year. It also works by promoting and feeding a very small group of so-called professionals. We, the Portuguese, ended up being successful in breeding good film technicians who work every year and are well trained, but we are very poor at developing talent who could direct, write, produce and create good movies.  We have literary writers on par with the best in the world. We have a few who have earned or deserved the Nobel Prize.  Think of people as Saramago or Fernando Pessoa. For such a small country, it’s really amazing. But when it comes to scriptwriting, we are awful. Scriptwriting, I usually say, is the most technical of all Fiction writing. You really need to know what you’re doing. And in this country, for the most part, people don’t.

When I started writing movies I didn’t know that much about it. I wrote a few scripts over the years, in my 20’s. I wrote some short-movies and some long features. It can be very frustrating to write for cinema because you can write and write and write but unless you convince someone to produce the movie, it will never leave your desk drawer. Writers are the only professionals in filmmaking who do all the work before there is even a glimpse of some money coming in. You can write many scripts, for years, without earning a cent! Just look at Guillermo del Toro, the Award-winning writer-director: the other day he unveiled 17 scripts he completed without ever having the chance to make them. 17 scripts! This is the commitment a screenwriter must have to the Craft.

I never wrote 17 scripts. At least not long features, anyway. I wrote nine or ten. Some of them when I had no idea what I was doing. But I did know a few things people around me didn’t. I remember I was invited by a movie director to watch the first cut of his million-dollar movie. I watched it and when he asked me what I thought, I said: «Well, you have an 80-minute movie with a 20-minute ‘set-up’…» To which he replied: «What’s a ‘set-up’?» That’s how bad it was… Still, I did know what a ‘set-up’ was. And yet, my scripts weren’t being produced and I still was an outsider to the Portuguese would-be-film-industry (and I guess I still am).

Then one day, a friend of mine, a young movie director called Nuno Madeira Rodrigues invited me to co-write a thriller in English with him. We worked on the script for a year. I always thought it was a good exercise, but I had learned over the years it most likely never be made. He, however, always believed we could produce it and got the money for it. And so we produced the movie. We ran castings in L.A., and in Lisbon, and in New York – American, British and Portuguese actors. We filmed in a small town in Portugal called Oliveira de Azeméis and in Lisbon, and in Oporto, and in Brooklyn, N.Y. And it was a nightmare. We were way over our heads. Every single day there was an impossible challenge we had to overcome. It was a mess, not the least because people in Portugal were not used to do the things we were doing. But we got it done. I don’t know how, but we did. We called it REGRET. And we had it distributed in the US. And in Canada. And Puerto Rico and other territories. You can still watch it at Amazon, here. Of course, we never made a cent from it, but it was an incredible experience: both frustrating and rewarding – I can still find things I really like and things I really hate in the movie, not unlike the experience of producing it.

Since then I’ve written four more short-scripts and two TV-pilots that were produced. None was particularly successful, but it doesn’t matter. I loved doing them. And so here are a few random lessons I learned from these experiences:

And these are simply a few of the lessons I got from my experiences in filmmaking. I know there are more and I hope there will be a lot more in the future. See you around the next campfire, fellow warriors.