One interesting aspect of THE HUDSUCKER PROXY is its approach to time and the idea of second chances. As I said in the last post, this is (probably) my favorite Coen movie and it means a lot to me. The movie starts with the camera arriving at New York in the last few moments of 1958. We hear the voice of Moses (played beautifully by Bill Cobbs) narrating as if he was a Shakespearean or a Greek chorus – he is speaking of the way people are oblivious in this last few moments of the year, ‘having a good time’, maybe misunderstanding the nature of Time itself. As the camera travels through the snowy skylight of the Big Apple, we approach the Hudsucker Tower, topped by a splendid immense clock with a lighted hand counting the fatidical seconds as time runs out. Below the clock is the Hudsucker Industries motto: The Future is Now. In a moment, old ’58 will be gone and the new ’59 will begin. But before that happens, young Norville Barnes climbs out of the window of the office of the President of Hudsucker Industries. It’s his office. He has climbed the ladder to the position after the previous President, Waring Hudsucker himself, committed suicide by jumping from the top of this same building: 44 floors not counting the mezzanine. It seems the top position of this amazing corporation is not as exciting as it can be, no?

I spoke a little bit about the Nature of Time when I wrote about THE MATRIX here. I believe that, in the end, we must embrace both our limitations and our ability to choose – what matters is what we choose, our attitude, facing our finitude and our limitations. What matters is our ability to ‘make things happen’ in our lives. To ‘take in’ our time as best as we can (which is much more complex than simply ‘live every moment to the fullest’ as if there is no tomorrow – there is tomorrow and we must want it too). 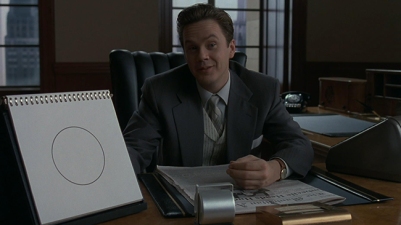 Now, in THE HUDSUCKER PROXY the Coen brothers are focusing on the way Capitalism acts on the old and the new – we have the idealistic Norville Barnes against the Board of Directors headed by the ‘straight-for-the-jugular’ Sidney Mussberger. In a way, they represent the cut-throat kind of capitalism Max Weber talks about in his groundbreaking work THE PROTESTANT ETHIC AND THE SPIRIT OF CAPITALISM. He quotes Benjamin Franklin: ‘Remember, time is money.’ Weber explains how the devout protestant of the 19th and 20th century believed that it was their duty towards their lives and especially towards God that they apply themselves to their material gains. Idleness was seen as a sin. As Franklin would say: ‘He that spends a groat a day idly, spends idly above six pounds a year, which is the price for the use of one hundred pounds’. Meaning: every idle moment has a monetary cost. In this spirit, we can also follow the works of Frederick Taylor, of which Peter Drucker would write: ‘some of the most influential writings in Western Society since the Federalist Papers.’ Taylor’s Scientific Management would lead to punch-clocks, hourly wages, timetables, measured tasks, prolific production operation management, time management and other narrow productivity measures. And if we feel that is a way of thinking exclusive to Protestants, I would be curious to learn what Weber would say to nowadays work ethic of some Indians and Chinese – surely not Protestant in their majority.

This kind of narrow-minded Capitalism, though, misses a few points. First of all, Meritocracy is not what it’s lined up to be nor is it the way of the land. Corruption and nepotism are much closer to the real way things actually happen. We can see that in THE HUDSUCKER PROXY: Norville Barnes ascends to the office of President of Hudsucker Industries not because of his merit but because of his demerit and sheer luck. Luck, as it turns out, (or the Gods, as THE HUDSUCKER PROXY seems to point out) has a lot more to do with success, studies show, than what Capitalists and Capitalistic Aristocrats want you to believe. On the other hand, a short-sighted understanding of Meritocracy does not recognize the role of so many important individuals in society. Teams and other strange groups are often much more effective in completing all kinds of tasks and the role of each member in these is not always fairly recognized. A soccer striker, for instance, may be idolized for the goals he scores, but the goalkeeper has an equally difficult and crucial task and not only earns less but also has less amount of glory.

And then there’s Schumpeter’s Creative Destruction: it is the market itself that will choose the failure of some to give way to the success of others. ‘Out with the old, on with the new’ says someone in the movie. What THE HUDSUCKER PROXY points out, though, with impressive fairness, is the significance of second chances. A society without a safety net is a society where Fear of making mistakes reigns. And that will certainly increase the drive towards corruption and slow down innovation. In the movie, the safety net comes from the Gods themselves: as Norville Barnes falls relentlessly from the Hudsucker Tower (SPOILER ALERT) it’s Moses himself, the unsuspecting chorus, who stops the clock and gives him a second chance. The ability to fall (or fail) and rise again is inherent to a just society, and the inequality that we complain about in today’s economy may result from this feeling that only the rich and powerful have second chances, no-one else.

In the end, it’s important to understand that work cannot and should not be the sole and major focus of our lives. That is also what Norville seems to learn at the end. Being the President of the Hudsucker Industries is only of value if the rest of his life, in particular his personal life, is also satisfying. Idleness, feelings, empathy, being able to enjoy the Universe, are also important factors in a healthy society.

Let’s speak more of this in the future. The future is not necessarily now. Sometimes now should be simply now. Take it in. And paraphrasing Kipling: take victories and failures as the impostors they are.